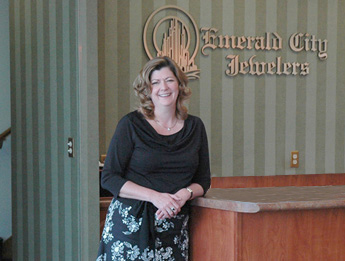 Taking a quick look back into her early years, Sheri's father was self-employed, owning an architectural firm. Entrepreneurship, she discovered, ran in the family; art and design were very prominent as well.

Upon graduating from Iowa State University with a degree in Art & Design (emphasis area, metallurgy), Sheri moved to Quincy, IL, to further her education at Gem City College.

Sheri's career in the retail jewelry business began post-college when she was hired by an established Quincy jewelry store. She spent her first two years on the sales floor followed by a transition to the bench, where she spent the next 8 years. With experience in both areas, Sheri soon realized that she possessed a valuable skill set in the jewelry world as she understood from experience how to translate what could be done in the shop to a customer on the sales floor, where she truly felt her calling. Sheri's mind began imagining ways to merge the two into creating her dream career.

After the birth of her second child in 1989, Sheri began implementing ideas for a transition to work from home, a pioneering move in that era. Solidifying her home business concept on April 28, 1990, Emerald City Jewelers Custom Design and Repair was born. Sheri's new home-based business, located in the basement of her home, focused on repairs and custom design work for friends and family. As her business grew, she added repair work for two jewelry stores located in Hannibal, MO, and three jewelry stores in Quincy, IL.

In 1995, Sheri was ready to move her dream forward with a 'brick and mortar' location; she opened a small store at 20th and Jefferson Streets in Quincy. The store remained there for two years after which she moved it around the corner to a slightly larger location. Her business flourished and 4 years later (2001), she moved her store to 3236 Broadway, modifying the business name to Emerald City Jewelers.

In late 2020, Sheri discovered the perfect location for a new home and, following her heart, allowed her dream to move forward. Today you can visit the beautiful new Emerald City Jewelers at 2001 Maine Street, Quincy, in the heart of the historic district. While the retail store is new, Emerald City Jewelers continues to feature the same warm, friendly, knowledgeable staff combined with a stunning showroom filled with exquisite jewelry.

Sheri and her staff invite you to choose Emerald City Jewelers for beautiful gifts that Celebrate Your Love in elegant, meaningful ways.

We have jewelry professionals ready to help.